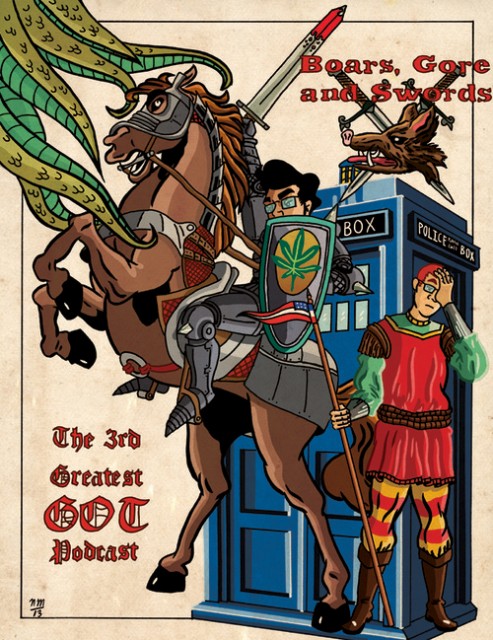 This illustration was supposed to be posted last week but due to all 4 of my wisdom teeth being pulled I was out of commission, feeling better now I can finally post this Illustration. This is based upon the the awesome podcast Boars, Gore, and Swords. It is hosted by comedians Red Scott and Ivan Hernandez they re-cap the Game of Thrones TV show, as well as read the books and regurgitate it into to comedy bits for the listener, and does what you should be watching episodes in which they recommend what TV shows to watch. The best part of the podcast is whenever Red and Ivan’s conversations just digress into either Comics, Tv, Pop Culture, Comedians, and or Weed.

This illustration is more based on the Dunk and Egg stories they recently read. I imagined Ivan as Dunk and Red as Egg because whenever the conversations break down into fictional war strategy Ivan usually goes with a more physical response such as bust a dudes head in with armor mounted spikes, while Red tends to go with a more tactical response. It is a stark contrast to what would actually happen to the both of them in a war scenario, which is die a horrible death.

There are little clues in this illustration as to what they most talk about on the podcast such as the flag Red is holding is a shout out to the west wing and Aaron Sorkin, as well as the Tardis is a shout to to time travel. In Ivan’s case I chose to depict him with a weed shield, and Cthulhu monster tentacles attacking him and his stead. All of this is self explanatory if you listen to the podcast. Btw if the lettering is hard to make out it says “the third greatest game of thrones podcast”.

This is the best, my legs have never been in such great shape - Red.

Support Ivan and Red by shopping through Amazon!

Support BGaS through Patreon to unlock digital goodies like wallpapers and access Goal-funded episodes and projects before the general public.